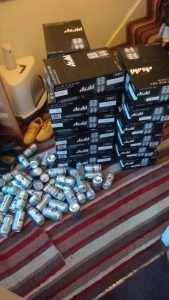 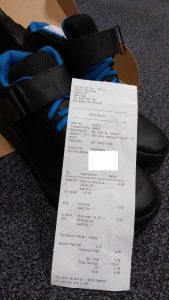 Congrats to Luke who managed to get a pair of cycling shoes from Rutland down from £120 to £4.66. 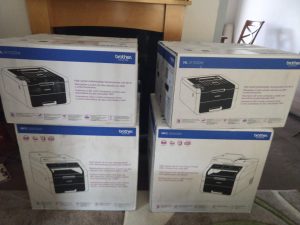 A couple users managed to catch a few of these Brother HL3170CDW, Wireless, A4, Colour Printers from Staples for £10.79. Congrats!

The deal was later featured on hotukdeals and by that point they changed the price. You can see why it is important to get there quick.

In June, johnintheuk who picked Cath for the £14.80 made.

In September, oscarandjo picked Water Aid for the £18.28 made.

Note, we don’t get a payout every month as sometimes it doesn’t pass the payout threshold.

My personal win this month was 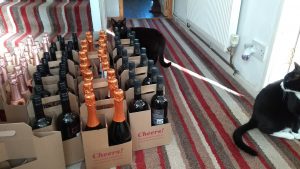 I have begun working on a US version of dealferret. Currently under a clumsy domain of us.dealferret.uk, I will have to find it a more suitable home. It is still processing the initial few stores and it has very limited price history. Stores like Walmart have 1.3 million items. This takes a while to process.

The site is hosted on a Scaleway server which had 50GB of disk space. This was the lowest end box I could find, and in the last few months it really wasn’t enough. Several times the server ran out of space and I was surprised the databases managed to survive without being corrupted.I recently migrated to a server double the size, which was relatively easy thanks to Scaleway’s system. Unfortunately, this is not enough as we are already using 90% of storage on the new disk. The UK version monitors 3.5million products and the US version already monitors 3.2million. The next step may be to move to an ARM system. There may be a random couple hours of disruption some time in the future.

Lastly, you can now get the ferreted deals on twitter. 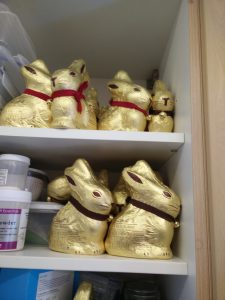 User penguin42 writes in to show his chocolate bunny collection. Down from £5 to £1.50 at Ocado. 27 bunnies which is more than 5kg of chocolate.

This month’s winner was Danielsan. £23.12 donated to Mind.

This month’s winner was papalix and £17.65 went to Friends of the Elderly. 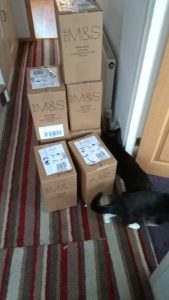 Meanwhile, I have been stocking up on wine. You may notice the little vivino buttons, on wine product pages, which will take you to the review of the wine. Some may be incorrect because determining the review is automatic. There have been a couple very good deals recently. First there was Barkan Classic Malbec Wine at £2.29 a bottle down from £10.25. Having tasted it, it tastes like a very good £9 wine. I have 20 and will get more next Ocado order. There was also Badgers Creek Shiraz Cabernet also at £2.29. Somewhat more average £5 wine, but still good enough for the price. Probably won’t get another 20 bottles though. Fragoso Chardonnay at £1.57 a bottle was an exceptional deal. It is a very good wine also probably around the £9 mark as well. I have 36 bottles of that one.

I also constructed one of these Vegepod Vegetable Garden Kits. Not really worth the £200 original price, but a steal at £5.90 from Homebase. Homebase have a disconnect between the checkout tills and the website. Often it will still state the original price at the till. You have to show the sales staff the site and they will check the system, get the OK from a manager and charge the website price.

One of the most common annoyences users have been reporting is the mass of items they have no interest in appearing on their deal feeds. This has been primarily been about clothing which goes through wild price drops. I have been working on a solution for some time, and recently I made it must more friendly. You may have noticed these

tags appearing under the results. These are the tags that belong to the product. Clicking them will make the tag be entered into the tags tab at the top of the page. 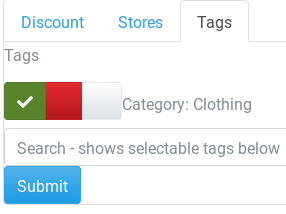 Next to the tag (in this case Category:Clothing) there are three coloured boxes. The green tick box tells the search to look only for product that have this tag. The red box which gets a cross when clicked, tells the search to only show products that do not have this tag. The last, gray, box removes the filtering for that tag and ignores whether it is present or not. If you are not interested in clothes, click the Clothing tag, click the red box and hit search again. If you are happy with this new search, you can click the home button and it will be remembered as your default. There is a text box you can start typing in to find additional tags. Currently tags are either categories the item is in, or elements of the product name. The name tags allow you to, for example, filter out all products that have the word Xbox in them.

The categories are determined from the section of the site the product was found in. It is a long process to correctly label all items, but if you have specific tags that are interest to you, either to find items of or to filter out, then do contact me. 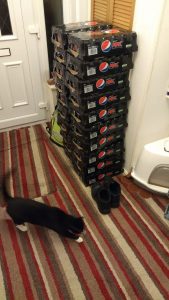 I couldn’t pass up the Pepsi Max deal from a couple months ago, so I kept it in my Ocado basket. I completed the order the other day and now I have 160 Liters. Works out to be less than 15p per can due to a voucher. By completing the order I could get my last batch of the Armagnac.

Also with the order I got a few crates of San Pellegrino sparkling water. It was 65p per crate of 24, rather than the usual £12. That works out to be under 3p per bottle. Somehow Ocado managed to get the price wrong twice. 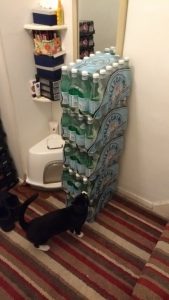 Overall a huge volume of drinks but not quite a record breaking purchase. 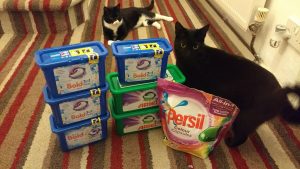 One thing to remember when looking at clearance offers from Wilko, is that even though they may not have any available online, they probably have some in store. Well worth a quick check if there is one convenient. These Bold, Ariel and Persil bags were down to below the magical 10p per wash line. Some still had the old prices on the shelves, so you may have to check at the till.

This month’s winner was user yehehehes. He chose NSPCC as the recipient of the £11.45 made this month.